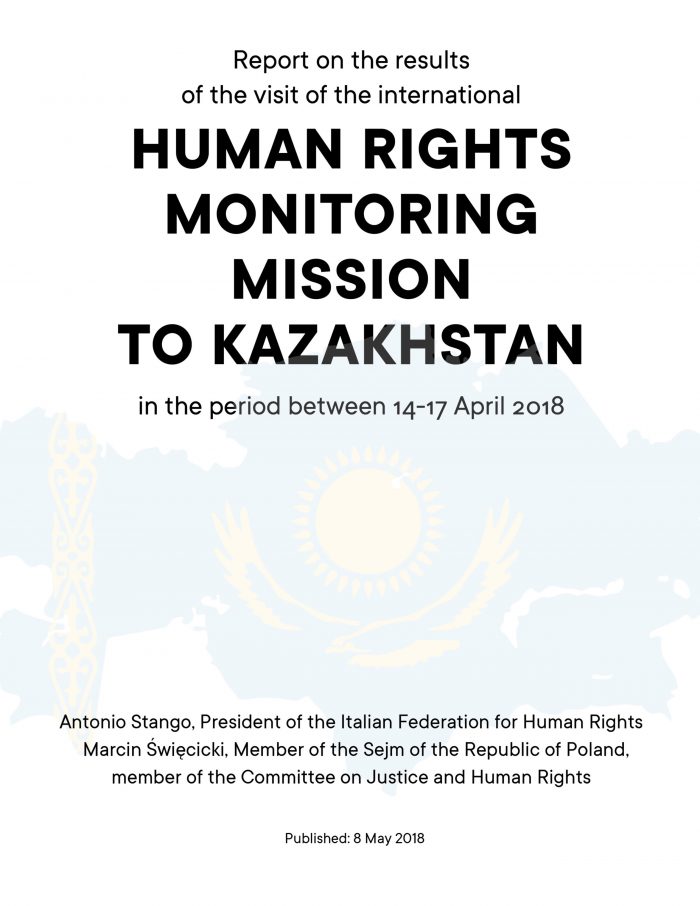 A human rights monitoring mission (the mission) took place in Kazakhstan from 14 to 17 April 2018. The mission, whose members were Marcin Święcicki, member of the Polish Sejm, and Antonio Stango, President of the Italian Federation for Human Rights, visited Kazakhstan at the request of Kazakhstani human rights organisations. The purpose of this visit was to monitor how Kazakhstan is fulfilling its obligations pursuant to international human rights treaties.

With the cooperation of the Foreign Ministry of Kazakhstan, the mission met with a deputy minister of the Ministry of Internal Affairs and а deputy prosecutor general, as well as with other representatives of law-enforcement bodies. In addition, the mission met with civil society representatives: human rights defenders, civil activists, lawyers, and relatives of detainees. The government made possible a visit to a detention centre in Almaty in order to meet three detainees.

The government denied the mission to visit the penal colony where Mukhtar Dzhakishev is held. Therefore, the mission did not succeed to obtain first-hand information whether the human rights of Mr. Dzhakishev – who is suffering from life-threatening diseases – are respected.

During the meetings with the state officials, special attention was drawn to the issue of the lack of efficiency, independence and transparency in the National Preventive Mechanism, as well as the need to reduce its dependence on the state so as to bring the situation up to international standards. The mission recommends that the government bodies investigate torture complaints more thoroughly in order for complainants to be able to bring such complaints before courts.

Meeting with civil society representatives brought new insights into the accusatory tendency of Kazakhstani judicial and law-enforcement bodies. Moreover, it was pointed out that insufficiently clear definitions of terms in some articles of the Criminal Code of Kazakhstan (for instance, such terms as “extremism” and “incitement of social discord”) give room for abuse of different kinds; for example, it facilitates violations of the right to freedom of opinion and the right to freedom of association.

The mission examined the situation of those people whose prosecution is, according to human rights defenders, politically motivated. The mission members met with detainees Iskander Yerimbetov, Almat Zhumagulov and Kenzhebek Abishev in the detention facility in Almaty. The meetings with the detainees took place in the presence of government representatives.

There are reasons to believe that businessman Iskander Yerimbetov was tortured during his detention in order to make him “cooperate with the investigators”. According to his testimony, the investigators and those who tortured him let him know that he might be released if only his sister who has refugee status in Belgium returns to Kazakhstan and provides testimony against exiled regime opponent Mukhtar Ablyazov. As a result of beatings, psychological pressure and harsh detention conditions, Mr. Yerimbetov’s health has deteriorated: he was badly beaten, he believes that one of his ribs was broken, he sustained head injuries, for several months he has suffered from bronchitis, he has developed a hand tremor and his eyesight has worsened. Moreover, he has been having a constant low-grade fever for over three months.

Opposition activist Almat Zhumagulov and poet Kenzhebek Abishev pointed out that charges against them bear traces of a setup. They called attention to the fact that they were exerting their legal right to freedom of expression. Messrs. Zhumagulov and Abishev were presented in state-friendly mass media as if they have been proved guilty.

Lawyers and human rights defenders have reported threats to and ill-treatment of the detainees. Mr. Yerimbetov was intentionally put in a cell with previously convicted persons which is categorically prohibited by law. Mr. Abishev’s health condition is poor. All detainees have already spent over half a year under arrest. Taking into account the above, as well as considering the fact that the detainees have minor children, the mission recommends that the government change their measures of restraint to methods not requiring detention.

Pre-trail detention is the most severe form of a guarantee that a suspect remains available for investigation and trial, but should not be used as a rule (article 9.3 of the International Covenant on Civil and Political Rights – ICCPR). Other pre-trial restrictive measures such as home arrest, bail, obligation to report to police, and/or personal guarantee should be applied. Restriction on freedom applied during pre-trial investigation should be as minimal as possible until a final court sentence.

Ardak Ashim, Kazakhstani opposition activist and popular blogger from the city of Shymkent, fell victim to prosecution which Kazakhstani human right defenders characterise as “punitive psychiatry”. The grounds for criminal charges against her were her Facebook publications criticising the government of Kazakhstan. The mission has serious reasons to believe that the decision for forced placement in a mental hospital was based on a falsified medical certificate: the history of psychiatric disease of her late sister was used as Ms. Ashim’s to forge her medical certificate. We hereby welcome the fact that two and a half weeks after the mission had left Kazakhstan, the authorities released Ms Ashim from a mental hospital. Currently, Ms Ashim is under the guardianship of her relatives. The criminal prosecution against her continues.

Former head of the company Kazatomprom, Mukhtar Dzhakishev, has been imprisoned since 2009. In 2015, having considered Mr. Dzhakishev’s complaint, the UN Human Rights Committee acknowledged that Kazakhstan had violated a number of articles of the ICCPR in its criminal prosecution of Mr. Dzhakishev. The UN Committee called for Mr. Dzhakishev to be released. The mission members call on Kazakhstan to implement the decision of the UN Committee.

At this link the complete Report: