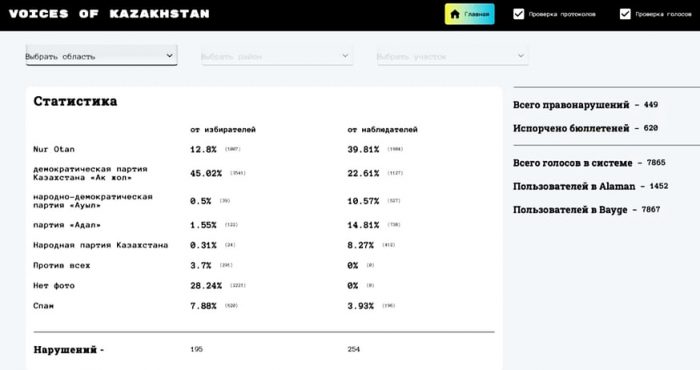 On 13 January 2021 a presentation was made by the “Voices of Kazakhstan” platform on the interim results of exit polls and observation of the parliamentary elections in Kazakhstan.

According to an independent exit poll, the votes (Bayga chat-bot) were distributed as follows:

Data on the Alaman chat-bot, based on the results of the polling station counting protocols that independent observers were able to obtain, although with a struggle:

Antonio Stango, president of the Italian Federation for Human Rights, thanked all participants and volunteers for the transparency of the parliamentary elections that took place on 10 January 2021. He said that, like many independent observers, the “Voices of Kazakhstan” platform had been subjected to various attempts to be influenced by the Kazakhstani authorities. Nevertheless, thanks to the well-coordinated work of programmers, as well as the Facebook and Telegram systems themselves, the platform’s developers believe they have succeeded in protecting the voices of Kazakhstanis. Stango noted that more than 6,000 messages were received on Telegram and WhatsApp numbers alone.

The coordinators of the “Voices of Kazakhstan” platform reported on Telegram and WhatsApp an attempt to influence the independent parallel vote counting system. As a result, all these messages disappeared after some time.

A similar attack was carried out on chat-bots that were collecting data on violations and election day results on 10 January 2021. As a result, about 28% of the nearly 8,000 registered users failed to send in their ballots.
All those who have encountered this problem, please try to resend your votes or send them on Telegram or WhatsApp to this number: +380 95 736 35 29.