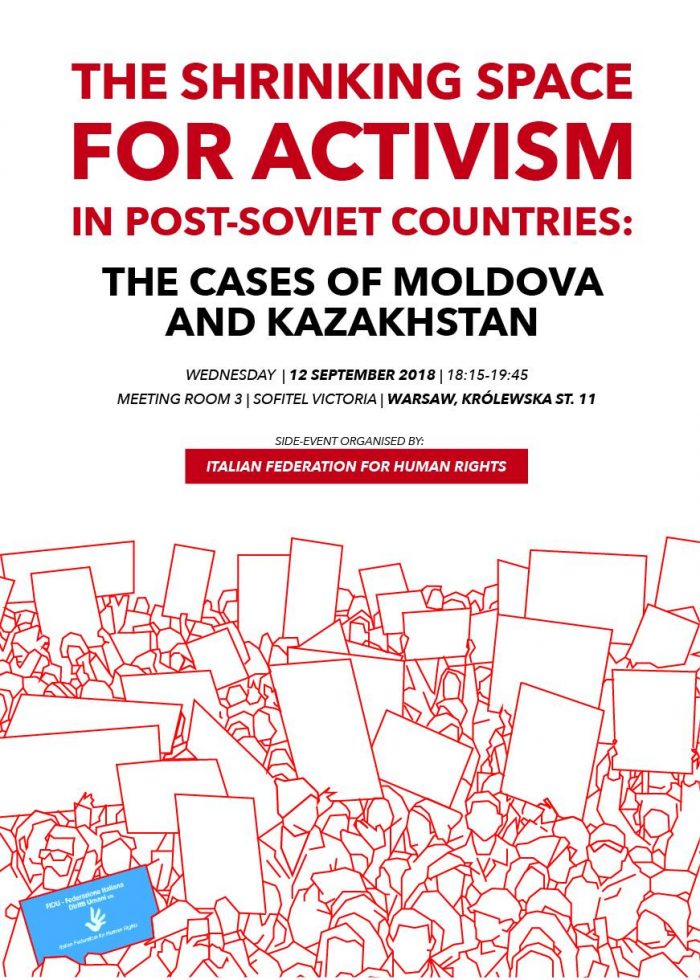 At the Human Dimension Implementation Meeting of the OSCE (Organisation for Security and Cooperation in Europe), which will take place in Warsaw from 10 to 21 September, the president of FIDU – Italian Federation for Human Rights, Antonio Stango, will chair the event “The shrinking space for activism in post-soviet countries: the cases of Moldova and Kazakhstan”, on 12 September at 18:15 in Meeting Room 3.
The OSCE HDIM is an annual forum in which the representatives of the 57 Member States and civil society organisations can discuss the issues of effective implementation or violations of human rights clauses of the OSCE’s constituent documents and subsequent agreements on the subject.
Within this framework, the event organised by FIDU will focus on the problems experienced by activists in the post-Soviet countries Moldova and Kazakhstan. During the conference, President Stango will present the results of recent missions held in both countries over the past few months. The event will be an opportunity to listen to the direct testimonies of civil rights activists and other representatives of civil society in these countries.

The guests will include:
● Domnica Manole, judge of the Court of Appeal of Chisinau
● Alexei Tulbure, Moldovan civil rights activist, former parliamentarian and representative of Moldova to the Council of Europe and the United Nations
● Marcin Święcicki, parliamentarian from Platforma Obywatelska, an opposition party in Poland, former minister for Foreign economic cooperation and former mayor of Warsaw
● Elena Semenova, human rights activist, in particular for political prisoners in Kazakhstan