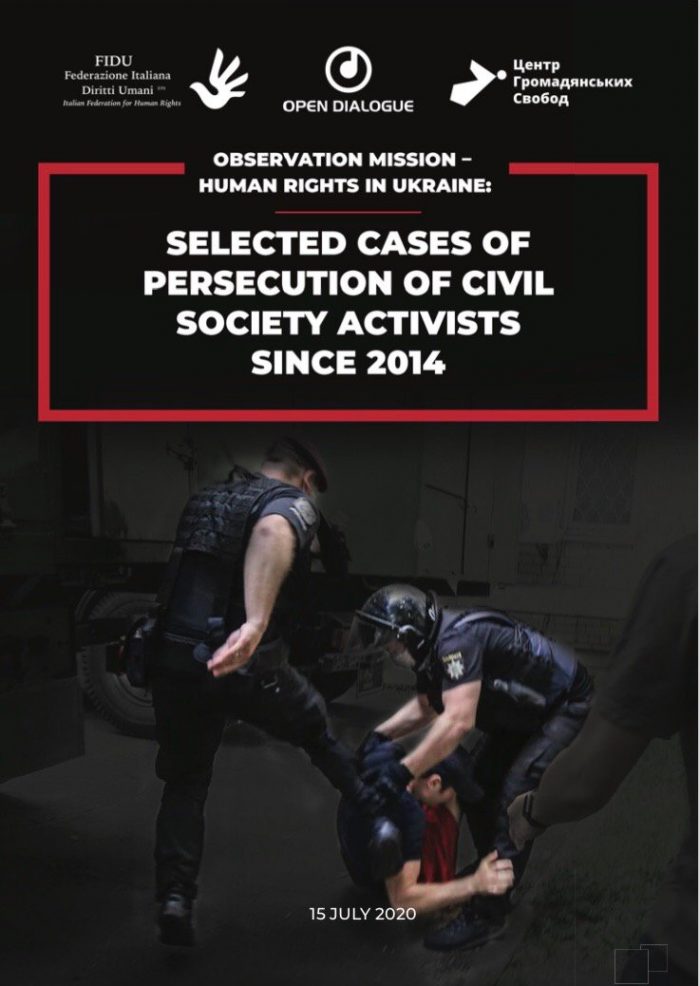 The Italian Federation for Human Rights – FIDU, the Open Dialogue Foundation and the Kyiv-based Centre for Civil Liberties released a joint report on selected cases of persecution of civil society activists in Ukraine since 2014.

This report includes, among else, direct observations made during a human rights monitoring mission by members of FIDU and ODF to Ukraine in March 2019, at the invitation of representatives of Ukrainian civil society. The mission visited Odessa and Kyiv, where a number of meetings were held with activists, experts, relatives of Ukrainian political prisoners in Russia, political refugees, Ukrainian officials, and diplomats accredited in the country. The mission participants also monitored a peaceful protest in Odessa and took part in a round table in the Verkhovna Rada (Parliament) of Ukraine, on “Persecution and violation of the rights of Ukrainian citizens in Russia, Belarus and Kazakhstan”.

The mission focused on the problem of attacks on Ukrainian activists struggling against corruption, local oligarchic systems, dysfunctions, or law enforcement agencies that are either passive towards or supportive of the systems, and that are generally believed not to have sufficiently reformed after the Euromaidan revolution of 2013/14.

The report includes the opinions of the civil society activists, human rights defenders and experts whom the mission members met, as well as information provided later by activists. It does not cover the serious situation in the parts of Donetsk and Luhansk regions controlled by the Russian Federation and in Russian-occupied Crimea, issue to which the three organizations devoted other initiatives.

Organised with the financial support of the Italian Federation for Human Rights, the mission was attended by Kornelia Wróblewska (Deputy of the Sejm of the Republic of Poland of the VIII convocation, member of the Polish–Ukrainian Parliamentary Group), Antonio Stango (President of FIDU), Eleonora Mongelli (Vice-President of FIDU), Bartosz Kramek (Head of the Foundation Board of ODF), Liudmyla Voloshyna (volunteer for FIDU), and Natalia Panchenko (human rights activist, mission coordinator).