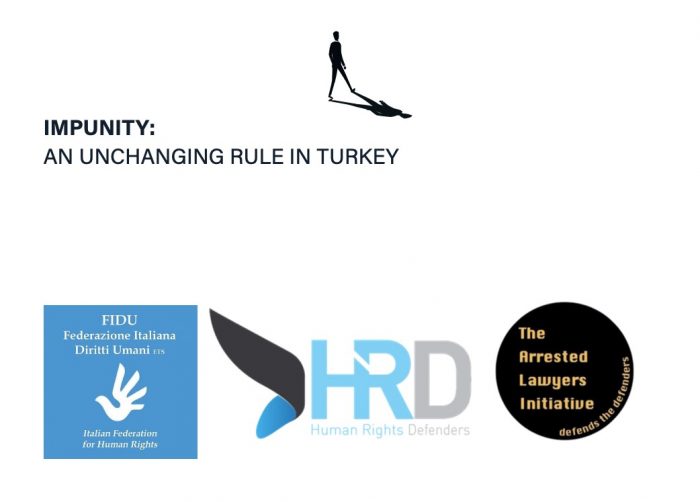 In this report, we examine whether the Turkish State complies with its negative and positive obligations in regard to torture, enforced disappearance, extrajudicial, summary or arbitrary execution, and arbitrary detention, or if there is a practice of impunity with regard to these crimes. While doing this, we have firstly provided brief information, including definitions of these crimes, which are summarized from the relevant reports of international and national institutions that are documenting the situation in Turkey.

We have also provided some information on Turkey’s two dark eras, in terms of human rights: the 1980s and the 1990s.

Then, we touch briefly on the current legislation that produces impunity, and analyse such legislation under international law, and present some statistics showing the performance of the judiciary in preventing and prosecuting torture complaints.

We conclude that in Turkey impunity is not an aberration, but, rather, it is the norm when a rights violation is committed against individuals by state officials.

a) the moral legitimization of the unlawful acts of state officials,

b) the protection provided for perpetrators by administrative and judicial authorities,

c) the legal regulations either constitute obstacles for investigation and prosecution, or provide for an explicit impunity for perpetrators.

Within the last four decades, Turkey has experienced, and has been experiencing, gross human rights violations and impunity practices, as explained above. After the military coup of 1980, an impunity clause that was annexed to the Constitution protected those responsible for gross human rights violations until 2010, when that clause was removed. However, 2010’s constitutional reform has not led to effective prosecutions. Although there was no legal impunity clause for 1990s’ human rights violations, including extrajudicial killings, enforced disappearance, burning the villages of Kurdish people, the protection provided for perpetrators by administrative and judicial authorities frustrated the prosecution of the perpetrators. Although, some prosecutions were commenced in the 2010s relating to those crimes, as explained above, all of those cases yielded no result, due to interventions made after the pro-government Unity in the Judiciary Group won 2014’s election for the Turkish Council of Judges and Prosecutors.

As in the 1980s and 1990s, the perpetrators of the gross human rights violations that have been widespread since 2016’s coup attempt, including murder, torture and enforced disappearance, have been protected through synchronised efforts by all branches of the Turkish State: either by laws and decrees or by state practices.

In conclusion, in today’s Turkey, as the social-politic landscape and the legal framework which create impunity stand, the victims of torture, enforced disappearance, extrajudicial, summary or arbitrary executions, and arbitrary detentions have no chance to hold the perpetrators accountable for their crimes.