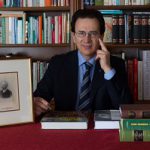 A political scientist, he has been working for human rights since the early 80s. In 1987 he founded the Italian Helsinki Committee together with Paolo Ungari and other experts and activists. He has been leading several NGOs and international projects, monitoring conflict and crisis areas, consulting for the European Union Commission and Parliament and for the Italian Chamber of Deputies and Senate, organizing dozens of international conferences, enacting nonviolent initiatives in totalitarian States, and representing the Nonviolent Radical Party transnational and transparty (an NGO with consultative status at the ECOSOC) at the UN Human Rights Council in Geneva. On behalf of the International Helsinki Federation he took part in missions in Romania, Albania, Estonia, Latvia, Lithuania, Belarus, Kyrgyzstan, Russia, Tajikistan; on behalf of Hands Off Cain in four States in Central Asia and four in Western and Southern Africa; with various NGOs in four missions in Cuba and two in Iraqi Kurdistan; for the European Commission in Armenia, Russia, and Tajikistan. In 2003 he organized a Summer School on human rights education in Lebanon for the Euro-Mediterranean Human Rights Network; from December 2003 to August 2006 has been Project Director of the Freedom House Human Rights Training and Support Program in Kazakhstan. With ECPM – Ensemble contre la peine de mort he has been based in Paris from September 2015 to September 2016 as the Coordinator of the VI World Congress Against the Death Penalty which took place in Oslo in June 2016. Among else, he founded and chaired the Italian Committee for the Defense of Human Rights in the Eastern Block (1981-1987), and has been member of the Executive Committee of the International Helsinki Federation (1988-1992), treasurer of No Peace Without Justice (1995-1996), member of the Board of Certi Diritti (2014-2015) and President of LIDU (from October 30, 2016 to January 19, 2018). A publisher and editor-in-chief of magazines and specialized journals, he authorized a number of essays and articles on human rights and international relations. He is a member of the Scientific Committee of FOREF (Forum Religionsfreiheit) and has been lecturing in Universities and post-graduated courses in Italy (SIOI, Roma Tre, Sapienza, LUMSA), Kazakhstan, Kyrgyzstan,  and Uzbekistan. In 2018 he has been a shortlisted candidate for the mandate of United Nations Special Rapporteur on the situation of human rights in Iran. He is currently Professor of International Organizations and Human Rights at Rome Link Campus University.