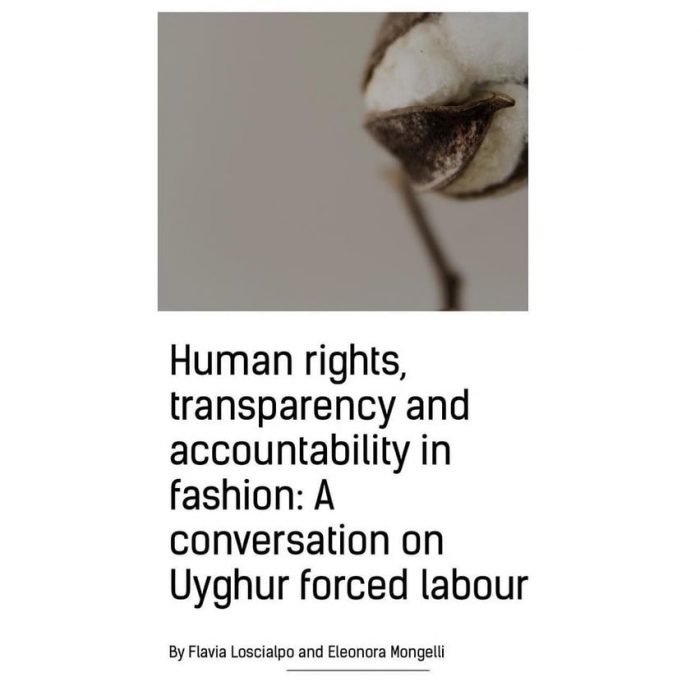 By Flavia Loscialpo and Eleonora Mongelli

This is a guest blog post for the Fashion Revolution website by Eleonora Mongelli, Vice President of the Italian Federation for Human Rights (FIDU) and host of the podcast Made in Slavery, and Flavia Loscialpo, a fashion academic and Senior Research Fellow at Solent University.

This conversation between Eleonora and Flavia provides a commentary on the following issues in relation to the Uyghur crisis: human rights and the social impact of the global fashion industry, forced labour, transparency in the fashion supply chain and corporate responsibility. To find out more about the fashion industry’s relationship with forced labour in the Uyghur region, please read this statement.

“The use of forced labour under a state-sponsored labour transfer scheme is tainting the global supply chain.”

FL: Xinjiang and th.e conditions of the Uyghur people are now at the heart of political debate. As an advocate for human rights, you have recently created the podcast Made in Slavery, which combines important testimonies with international investigations. The podcast raises awareness about the repression of the Uyghur minority in Xinjiang, and the forced labour that allows many international brands to make profit. What did these investigations and testimonies reveal?

EM: Over the past four years, several NGOs, academic researchers and investigative journalists have collected evidence, which shows the increasing repression of Uyghurs and other Muslim minorities in China. More specifically, in 2017 China’s government started a social re-engineering campaign against these minorities, which involves the use of forced labour under a state-sponsored labour transfer scheme that is tainting the global supply chain.

As exposed by ‘Uyghurs for Sale’ (2020), a report published by the Australian Strategic Policy Institute, between 2017 and 2019 more than 80,000 Uyghurs, the largest Muslim minority in China, have been transferred from their native Xinjiang, to work in factories across China. Some of them are being directly sent to the factories from detention camps, where many Uyghurs are arbitrarily detained. These Uyghurs are forced to work in factories that are part of the supply chains of at least 82 global brands within technology, clothing and automotive sectors. Moreover, an investigation report, by the academic researcher Adrian Zenz (2020), estimates that more than half a million Uyghurs are forced to work in Chinese cotton fields. This means that the number of brands directly and indirectly involved in such crimes is dramatically higher.

My podcast, Made in Slavery, discusses all these issues, focusing in particular on the necessity to adopt new effective due diligence rules which would prevent these crimes, avoid foreign companies’ complicity in them, and secure justice for the victims.

“We cannot leave it to the companies the choice to care about human rights and sustainability.”

FL: The situation is developing fast, with China boycotting some international brands that have explicitly taken a stance in favour of Uyghurs. In Made in Slavery you mention 82 international brands that work with factories relying on Uyghurs’ forced labour. How are brands – especially fashion brands – reacting now that further details are emerging, and the situation of Uyghurs is brought to the public attention?

EM: At first, when ‘Uyghurs for Sale’ (2020) was released and the brands listed in the report were informed about forced labour used in their supply chains, very few of them replied. Only later, when such abuses started getting considerable media attention, more brands have publicly expressed concerns. This shows how companies’ attitude towards human rights strictly depends on media attention and consequently on consumers’ behaviour.

However, voicing concerns about China’s policies comes with big costs. Following the stance taken by several brands against human rights abuses in Xinjiang, China’s government has begun an aggressive boycott campaign, forcing these brands to choose between supporting human rights and protecting their profits from the Chinese market. China is the world’s second-largest economy, representing an incredibly profitable market for foreign companies. While some brands have bravely stood firm on their position, others have removed from their websites any criticism of and reference to the Uyghur crisis.

For precisely this reason, we cannot leave it to the companies the choice to care about human rights and sustainability. Without legislation with extraterritorial effects, many companies will inevitably choose profit over workers’ rights, and those acting responsibly will be at a severe competitive disadvantage.

“If there is no traceability and transparency in the supply chains, brands cannot be aware of the effect of their business practices.”