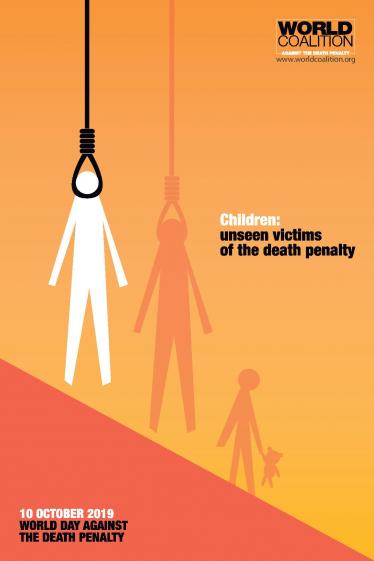 From 17 years now, each 10th of October, the World Day Against Death Penalty is celebrated to show the world the reality of this inhuman and degrading action. Since then, many States have abolished it or adopted a moratorium on their executions, but is still a common practice among 55 countries around the world. This year, the abolitionist movement pretends to focus the attention on the denied rights of those children whose parents live on the death row or already have been executed. It is well known that the victims of the death penalty are not only the ones executed, but also all the individuals who in are involved in this capital punishment in different ways, such as the medical and paramedical staff, pshycologists and family members. Often forgotten, among the hidden victims of death penalty sentences, there are the children of convicted parents, who carry an emotional and psychological burden throughout their lives that represent a violation of their human rights. This trauma can be verified in every phase of the death penalty process: the trial, the sentence, the death row, the execution date and the execution itself. The feelings of hope, disappointment and anguish, which are present in all of the phases, have a long-term impact affecting the life of the victims even when they are adults. Furthermore, the stigmatization from the community, as well as the loss of a parent at the hands of the State, contributes to the generation of a condition of instability that affects the child’s life.

Regarding the 30th anniversary of the Convention on the Righs of the Child (November 20, 1989), and considerating the international context characterized by worrying signs from some countries, the FIDU, as a member of the World Coalition Against the Death Penalty, asks the international community to make a bigger effort in order to protect children and their human rights and to continue fighting for a justice that respects human rights and dignity of each individual.