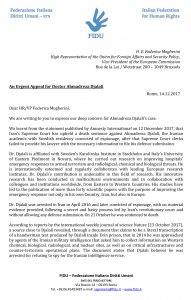 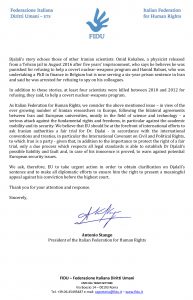 Dear HR/VP Federica Mogherini,
We are writing to you to express our deep concern for Ahmadreza Djalali’s case.
We learnt from the statement published by Amnesty International on 12 December 2017, that Iran’s Supreme Court has upheld a death sentence against Ahmadreza Djalali, the Iranian academic with Swedish residency convicted of espionage, after that Supreme Court clerks failed to provide his lawyer with the necessary information to file his defence submission.
Dr. Djalali is affiliated with Sweden’s Karolinska Institute in Stockholm and Italy’s University of Eastern Piedmont in Novara, where he carried out research on improving hospitals’ emergency responses to armed terrorism and radiological, chemical and biological threats. He is internationally esteemed and regularly collaborates with leading European research institutes. Dr. Djalali´s contribution is undeniable in this field of research. His innovative research has been conducted in multicultural environments and in collaboration with colleagues and institutions worldwide, from Eastern to Western Countries. His studies have led to the publication of more than forty scientific papers with the purpose of improving the emergency response not only in his own Country, Iran, but also in Europe.
Dr. Djalali was arrested in Iran in April 2016 and later convicted of espionage, with no material evidence provided, following a secret and hasty process led by Iran’s revolutionary court and without allowing any defence submission. On 21 October he was sentenced to death.
According to reports by the international weekly journal of science Nature (23 October 2017), a source close to Djalali revealed, through a document that claims to be a literal transcription of a handwritten text produced by Djalali inside Evin prison, that in 2014 he was approached by agents of the Iranian military intelligence that asked him to collect information on Western chemical, biological, radiological, and nuclear sites, as well as on critical infrastructures and counter-terrorism operational plans. The document states that Djalali believes he was arrested for refusing to spy for the Iranian intelligence service.

Djalali’s story echoes those of other Iranian scientists: Omid Kokabee, a physicist released from a Tehran jail in August 2016 after five years’ imprisonment, who says he believes he was punished for refusing to help a covert nuclear-weapons program and Hamid Babaei, who was undertaking a PhD in finance in Belgium but is now serving a six-year prison sentence in Iran and said he was arrested for refusing to spy on his colleagues.
In addition to those stories, at least four scientists were killed between 2010 and 2012 for refusing, they said, to help a covert nuclear-weapons program.
As Italian Federation for Human Rights, we consider the above mentioned issue – in view of the ever growing number of Iranian researchers in Europe, following the bilateral agreements between Iran and European universities, mostly in the field of science and technology – a serious attack against the fundamental rights and freedoms, in particular against the academic mobility and its security. We believe that EU should be at the forefront of international efforts to ask Iranian authorities a fair trial for Dr. Djalai – in accordance with the international conventions and treaties, in particular the International Covenant on Civil and Political Rights, to which Iran is a party – given that, in addition to the importance to protect the right of a fair trial, only a due process which respects all legal standards is able to establish Dr Djalali’s possible liability and fault and, in case of his innocence is proved, to warn against potential European security issues.

We ask, therefore, EU to take urgent action in order to obtain clarification on Djalali’s sentence and to make all diplomatic efforts to ensure him the right to present a meaningful appeal against his conviction before the highest court.

Antonio Stango
President of the Italian Federation for Human Rights